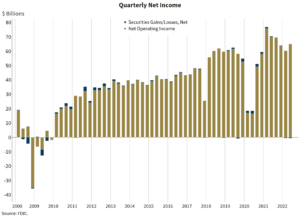 FDIC-insured institutions made $64.4 billion in the second quarter, an 8.5 percent drop from a year ago, according to the Quarterly Banking Profile.

The $6 billion overall drop was due to a nearly $22 billion year-over-year increase in provision expenses, from negative $10.8 billion in 2021 to $11.1 billion this year. Also, more than half of the 4,771 banks the FDIC insures saw an annual decline in quarterly net income. Net income increased $4.6 billion or 7.8 percent from the first quarter as net interest income growth exceeded the increase in provisional expenses.

Community banks insured by the FDIC reported a 6.5 percent or $523 million drop in net income from the year prior due to higher noninterest expenses, lower noninterest income, losses from securities sales, and higher credit loss provisions. A majority of the 4,333  community banks had less quarterly net income than the previous year. Net income increased $583 million or 8.4 percent from the first quarter. Total loan and lease balances increased by 3.7 percent or $414.9 billion from the previous quarter.

Total loan and lease balances in the banking industry grew by $913 billion or 8.4 percent. The industry’s NIM increased 26 basis points from the previous quarter to 2.80 percent, the highest quarterly growth in 12 years, according to the FDIC. Seventy percent of banks reported higher net interest income than a year ago.

“Given the uncertain economic outlook, banks will continue to prudently prepare for potential changes in credit quality,” he added. “Overall, the industry remains on firm footing and well positioned to withstand potential headwinds resulting from the Federal Reserve’s ongoing efforts to fight inflation.”