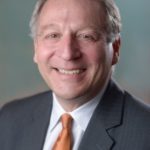 Daniel Daly, president and CEO of the Quad Cities’ SENB Bank, was elected 2018-2019 chairman of the Illinois Bankers Association. The election took place on June 22 during the organization’s annual conference at the Hilton Chicago.

At the same meeting, Jeffrey D. Snyder, president and CEO of Forreston State Bank, Forreston, was named IBA Banker of the Year.

Over the last 30 years, Daly has served in executive roles with several financial institutions prior to joining Moline-based SENB Bank. He was the founding president and CEO of First Capital Bank, which opened its doors for business in 1996, the first new bank chartered in Peoria, Ill., in more than 27 years. First Capital Bank’s assets grew from $5.3 million at inception to over $254 million in six years, prior to its acquisition by First Busey Corp., in 2004. He served as a regional president for Busey Bank for 11 years before joining SENB in 2015. He is a 1974 graduate of Spalding Institute and a 1977 graduate of Bradley University, Peoria.

Daly has been actively involved in community efforts, and he currently serves on the boards of Empower Illinois, Renew Moline, Gilmore Foundation, Regional Opportunities Council, SAL Children and Family Services and the American Red Cross. He has served on numerous other boards, and notably served as chair and treasurer of the Peoria Civic Center Authority and co-chaired the $60 million redevelopment in 2005. He also served as chairman of the Peoria Riverfront Museum and co-chaired construction of their $35 million museum in 2012.

“The IBA is pleased and honored to have Dan lead our board and executive team,” IBA President and CEO Linda Koch said. “He is a great asset to the association.”

Snyder’s banking career spans 40 years. Not only has he twice served on the IBA Board, but he also has served on numerous IBA committees. During his tenure at Forreston State Bank, he has changed its focus to a growth model that includes strong agricultural credits and operations. Other notable achievements include the acquisition of Kent Bank by the bank’s holding company, the conversion of the holding company to a Subchapter S and, most recently, the merger of the holding company’s two bank charters.

Since becoming president of Forreston State Bank in 1996, he has been involved in local charities like the Lions Club and Kiwanis Clubs and has served as chairman of the Forreston Hometown Days Committee. He is an advocate for serving the community and local schools – both financially and with his time, and FSB full-time employees receive up to 24 hours per year of paid time off to volunteer. In 2013, under his leadership, the bank was awarded the IBA’s Community Service Award.