One week after George Floyd’s death, St. Paul, Minn.-based Bremer Bank’s president and CEO Jeanne Crain released a public statement condemning racism in America’s history and culture, including in the banking industry. Several other bank CEOs did the same.

In September, more than 50 senior leaders at the $13 billion Bremer Bank went through training to reflect on their biases, both conscious and unconscious. They steeped in honest discomfort and unpacked how biases affect their leadership and work. After processing with Colette Campbell, the bank’s senior vice president of talent acquisition, together they condensed their thoughts and passed them onto their respective teams. “The change in ownership and responsibility is vital,” which includes a changing mindset, Campbell said, “and helping our leaders see that this is our work.”

Campbell has been taking more time to have conversations and connect with leaders at Bremer to help them understand the imperativeness of the work necessary for a real culture change. “It doesn’t happen overnight, and this [bias] didn’t happen overnight. It’s hundreds of years of dismantling systemic thought,” Campbell said. “People are open to it, but it’s about acting differently.”

“I think bankers are realizing that they need more than a checklist in order to have a viable [diversity, equity and inclusion] program that actually translates into more diversity, especially at the top of the house,” said Gretchen Clafin, president of the Pacific Coast Banking School in Seattle. Poised with the perspective of a banking academic, Clafin has noticed that more DEI officers are reporting directly to bank CEOs than before, and some larger banks are implementing implicit bias training in which all people at the bank participate.

A recent Deloitte survey found that 83 percent of millennials reported higher levels of engagement when they believed their company fostered an inclusive culture. In 2019, seven of every 10 respondents in a survey conducted by the recruiting firm Yello said they would consider looking for a new job if their employer didn’t demonstrate a commitment to diversity.

Behavior change can show up in hiring practices. Oftentimes when managers or leaders are trying to fill a position, Campbell said, there’s a perceived sense of urgency. “To change that behavior, we’re telling people that you actually have to go slow before you can go fast, because if you’re not slow, you can’t be intentional.”

The thing about unconscious bias, Campbell said, is that it’s unconscious. “If you don’t slow down enough to see what you’re doing, or where there’s opportunity, then you can’t make those changes,” she said.

Seeing where behavioral change needs to happen also comes from inviting others into the hiring process, and welcoming broad input. “Other points of view are going to help you get different candidates,” Campbell said.

This means that employees at all levels of the bank need to feel assured that their view will be honored, Clafin said. “People should trust that an alternative viewpoint will be valued, and it’s safe for them to express it.” 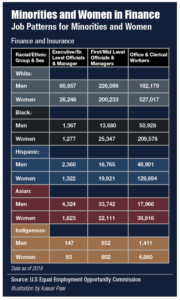 A recent study by Gartner, a research and advisory company for senior business leaders, predicted that through 2022, 75 percent of companies with diverse and inclusive decision-making teams will exceed their financial targets. The study also found that gender-diverse and inclusive teams outperformed their less-inclusive counterparts by 50 percent.

A diverse marketplace of ideas and perspectives that would’ve otherwise gone unknown is invaluable to a business. “The banking industry will only be stronger the more diverse it can become, so you know, we’re really in this for the industry as a whole,” Clafin said.

“Traditionally, diversity refers to differences in race, religion, gender, disability, sexual orientation, age, and education, among other variables,” said Steven Cates, faculty member for graduate programs at Purdue University Global, in a blog post. “But that definition is limiting in the current world of business. [In 2021], diversity is a subset of the process as it relates to engaging and including everyone within an organization in an attempt to meld into one cohesive culture.”

There needs to be a shift in perception, Clafin said, so that everybody in the bank understands the value of diversity. “Even just from a gender diversity standpoint, we all tend to be attracted to what we’re familiar with,” she said. “People need to be more comfortable being uncomfortable.”

Especially at rural banks, Clafin said it takes leadership at the top for the culture of a bank to change, but it also takes personal ownership. The bank could be checking all the boxes — doing the right training and having the right language in the employee handbook — but when it comes time to promote, there needs to be someone with power to make structural change.

“Unless there’s a leader in the bank who will help people look at things differently, I doubt there will be a huge shift from a checklist mentality,” Clafin said. “It’s too easy to stick with what you know.”

In addition to talent acquisition tactics, how can current staff be trained differently into the newness of cultural inclusion?

The shift from the comfort of familiarity and “how it’s always been” is catalyzed by the degree of courage behind conversations. Although the term is DEI, inclusion precedes true diversity, Campbell said. And that includes Midwestern bankers, who “haven’t seen themselves in this, because they think diversity is for other people,” she said. “Given our demographic breakdown, [DEI] looks different in different places that Bremer’s a part of.” Conversations and engagement are easier in the Twin Cities than in rural Wisconsin or North Dakota, she said. “That’s been the opportunity, but also the challenge. The opportunity is to help everybody focus on what the common thread is. Inclusion is really all about belonging.”

Another vital product of having a rich enterprise of backgrounds, cultures and perspectives, is the sustainable effects of representation. An organic way to multiply lasting diversity is for young people to look at the players in the financial industry and be able to envision themselves.

In financial services, the work of inclusion has the responsibility to bring people into the space who haven’t traditionally been a part of it. In the past, when most think about leaders in financial services, certain characters, colored by the country’s tradition and history, often come to mind. “They’re math oriented, they’re white, and they’re male,” Campbell said. “But all of us use money. So everyone belongs in this space.”

Campbell was raised by immigrant parents from Jamaica in a multicultural town outside Toronto. She speaks French, a little Korean, and more German than anyone in her husband’s family, all of whom are of German descent.

Campbell has lived around the world, and she knows the struggle of living in a foreign country without knowing the language, and having to figure it out. “That has really given me a posture of grace and humility that I don’t think I would’ve had,” she said. Those experiences helped her professionally as she challenges people to think about others.

When Campbell was a child, her mother would get together with a dozen other immigrant women for a “partner draw.” The draw, sometimes known as a “Paadna,” is a communal savings technique popular in Jamaican culture, in which a group of people pay a weekly sum to a trusted person in the group, known as the “banker.” Each week, one of the women, selected by the appointed banker, would receive the total amount, or draw, contributed by all partners.

“They didn’t understand banking, per se, but they trusted each other,” Campbell said. She noticed that whomever won each week was able to afford the dress or fix the washing machine. “It was neat to see my mom show up in this way in the community, and that these women were empowered by saving.”

Though Campbell’s mom didn’t get much of a formal education, “she actually did quite well for herself, not because of what she made, but because of how she saved,” Campbell said. “As a woman of color, seeing that in my own family has always given me an appetite and desire for my own personal wealth, and also to help others.”

Her own consequent conviction to help people understand their money and their agency, she said, has been powerful.

“I see who’s here and who’s not here, and part of my role is going out and being a woman of color who’s in the financial industry,” she said. “People don’t see themselves in this world because they don’t know the stories of other people in this world.”

Campbell, herself, is on the hunt for mentors within her industry. “I have some really great people who I look up to,” Campbell said, “But I don’t have enough people of color who I look up to in this industry.”

Campbell admires professional women who champion other women and minorities, such as Mellody Hobson, the chair of Starbucks Corporation, as well as Jacquette Timmons, Laura Huang and Brené Brown. Despite her profile, Hobson, clothed in a black dress with white lace, was still mistaken for a server at a ceremony where she was set to win an award.

Campbell said that COVID-19 offers both opportunities and challenges. “When we are in fear or ambiguity and we don’t know what’s going to happen next … that puts us sometimes into wanting to protect ourselves, or into an individualistic mindset,” she said. “As humans, we’re about self-preservation, and this work is continually challenging you to see and care about others.

“I think the biggest challenge is to keep it top of mind, to keep it a part of what we do.”