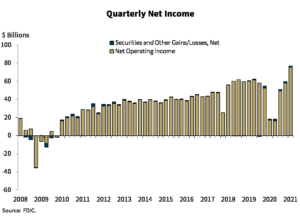 FDIC-insured institutions made $76.8 billion in the first quarter of 2021, an improvement of 315.3 percent  ($58.3 billion) from last year. Decreasing loss provisions, reflecting asset and economic improvements, drove the increase, the FDIC said in its Quarterly Banking Profile.

Net income was also up $17.3 billion (29.1 percent) from fourth quarter 2020, and three quarters of all banks saw annual improvements in quarterly net income. The share of unprofitable institutions dropped to 3.9 percent from 7.4 percent a year ago.

The banking industry reported an aggregate return on average assets ratio of 1.38 percent, up 1 percentage point from a year ago and up 28 basis points from fourth quarter 2020.

Community banks reported annual net income growth of $3.7 billion (77.5 percent), supported by an increase in noninterest income and a decline in provision expense. Seventy-three percent of community banks reported higher quarterly net income. Higher revenue from loan sales (up $1.3 billion or 126.4 percent) supported a 45 percent increase in noninterest income. Provision expenses declined $1.4 billion (78.4 percent) from a year ago, and $826.2 million (67.9 percent) from the previous quarter. They also reported an aggregate ROA of 1.30 percent, up from 0.87 percent a year prior.

Community banks bucked that trend, reporting a 1.4 percent increase from the previous quarter and 10.8 percent increase ($167.3 billion) since 2020. That growth was largely driven by loans made through the Paycheck Protection Program.

“As a result, banks were able to recapture loan loss reserves, yielding the first-ever recorded quarter of overall negative provisioning. This generated a rise in net income in the first three months of the year,” Strand said. “Financial institutions are prepared to boost lending as the recovery gains strength and demand for loans grows.”