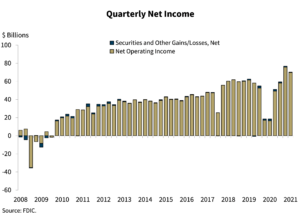 FDIC-insured institutions made $70.4 billion in second quarter 2021, a $51.9 billion increase (281 percent) from a year ago as net interest margin continued its contraction and loans grew slightly.

The increase was primarily due to a $73 billion (117.3 percent) decrease in aggregate provision expenses, reflecting economic growth and better credit conditions, the FDIC stated in its Quarterly Banking Profile. Nearly two-thirds of the 4,951 FDIC-insured commercial banks and savings institutions reported annual improvements in quarterly net income, and the share of profitable institutions increased 1.4 percent year-over-year to 95.8 percent.

Net income declined by $6.4 billion or 8.3 percent from 1Q 2021, driven by a $3.7 billion increase in provision expenses from the previous quarter. Average NIM contracted 31 basis points from a year ago to 2.50 percent — the lowest on record, and down from the previous record low last quarter of 2.56 percent. That was accompanied by a $2.2 billion decline in net interest income (1.7 percent) from the same quarter in 2020.

Community banks reported net income of $8.3 billion, up $1.9 billion or 28.7 percent from the same quarter a year ago, and they had a $2.3 billion (98.1 percent) decrease in provision expenses from a year ago. Higher commercial and industrial loan income, partially reflecting more fee income from payoffs and forgiveness of Paycheck Protection Program loans, helped to lift net interest income $1.4 billion from a year ago.

Credit quality continued to improve: Loans 90 days or more past due or in nonaccrual status declined $13.2 billion (10.8 percent) from the previous quarter. The noncurrent rate for total loans declined 12 basis points from the previous quarter to 1.01 percent. Net charge-offs dropped $8.3 billion (53.2 percent) from a year ago. The total net charge-off rate dropped 30 basis points to 0.27 percent — the lowest level on record.

“With strong capital and liquidity levels to support lending and protect against potential losses, the banking industry continued to support the country’s needs for financial services while navigating the challenges presented by the pandemic,” said FDIC Chair Jelena McWilliams.