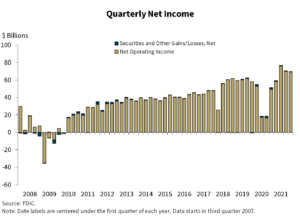 FDIC-insured institutions made $69.5 billion in net income during the third quarter, a nearly 36 percent increase from a year ago.

The increase, reported Tuesday as part of the FDIC’s Quarterly Bank Profile, was sparked by a nearly $20 billion decline in provision expenses. Two-thirds of all banks reported annual improvements in quarterly net income, and the share of profitable institutions year-over-year slightly increased to nearly 96 percent.

Net income decreased 1.2 percent from the second quarter, however, due to the $219 million increase in provisional expenses during that period. The net credit charge-off rate dropped to its lowest level on record, and the share of industry loans at least 90 days late declined for the third straight quarter, to the smallest percentage in 14 years. Loans 30 to 89 days delinquent are also close to the lowest ratio to total loans the FDIC has ever reported. The industry’s tier 1 risk-based capital ratio, which climbed to the highest level ever reported by the FDIC last quarter, held steady at 14.27 percent.

Community banks saw a net income increase of 19.6 percent or $1.4 billion from third quarter 2020. Provision expenses at community banks declined $1.4 billion (83.5 percent) from a year ago and increased $219.2 million (427.9 percent) from the previous quarter. Net interest income rose $2.2 billion (11.7 percent) from a year earlier, buoyed by higher commercial and industrial loan income, including from the payoff and forgiveness of Paycheck Protection Program, the FDIC said.