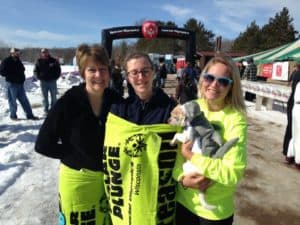 Jenny Jakel has been a part of AbbyBank for 41 years, a period in which the Abbotsford, Wis., bank has grown to $458 million from $13 million. Yet, Jakel’s preferred focus does not involve any discussion of profits. For that matter, it hardly deals with AbbyBank’s current customers.

Rather, the executive vice president routinely devotes her time to the next generation’s financial literacy.

“She’s very passionate about making sure she insures the next generation is financially savvy,” said Natalyn Jannene, AbbyBank’s assistant vice president of marketing. “Even if it just starts out with teaching a kid how to color in a sticker book about what a trip to the bank looks like, even just getting it started there, it is better than not giving them that at all.”

Jakel is a 2017 selection for Outstanding Women in Banking honors, along with four others. The recognition, sponsored by CliftonLarsonAllen, is presented by NorthWestern Financial Review magazine.

When discussing that sticker book, Jannene is referring to a specific effort she helped Jakel launch recently. When local children land in the legal system without their parents nearby due to estrangement or other legal issues, the court appoints a special advocate. Oftentimes, these advocates struggle to find a way to relate to the children in a short amount of time. Jakel and Jannene put together activity books depicting a typical trip to a bank along with kits to make save-spend-give jars.

“It doesn’t come back to us. We get nothing from it to the bank,” Jannene said. “But we’re teaching kids, even at a very early age, kids who might never get that education, what is a bank and what is the save-spend-give rule.

“Those are all things [Jakel] is just really passionate about.”

Jakel also spends time in area schools whenever she gets the chance. The younger the students, the more she enjoys it. 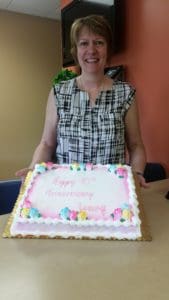 “One of my favorite classes to do is to go into the third grade math class and talk to them about coin and money when they start learning how to count money,” she said. “It starts at that level. When they come in the bank and they see you, just making those connections is so important.”

Jakel’s emphasis on education derives from personal experience. When she began at AbbyBank in 1976, she got the job thanks to a business education teacher’s recommendation. It was a three-month temp job. So much for “temporary.”

It took another 10 years for Jakel to move up the ranks enough to further the bank’s involvement within the school district. Starting as a secretary receptionist, she soon moved to loan processing and then to loan processors supervisor. Each step forward seemed to be into unchartered territory. 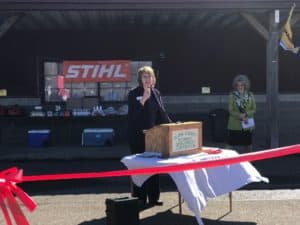 “As the bank grew and new positions had to be created, I was the one who would step into that role and create that position,” she said. “… I always say I worked in every department enough to be dangerous but not enough to be an expert.”

Such a progression led to time spent in marketing, human resources, branch management and eventually back to commercial lending. Now, Jakel is working to establish a retail banking department before her own retirement, though no timetable has been set for that departure. Five years ago, Jakel would have thought she would be retired by now, and now she says it won’t be for another five years.

Whenever that time comes, Jakel will continue educating the next generation until then. Therefore, AbbyBank will, as well.

Since the early 1990s, a youth incentive program for finance has led high schoolers to teller at the bank, now helping out at five different branches following a 2016 merger with Fidelity Bank, Medford, Wis. As might be expected, those tellers stick around for full-time gigs in the summer, and some continue on as such after graduation. 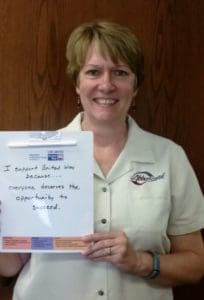 “There’s a module they actually have to go through to get exposure throughout the bank,” Jakel added.

That sounds a lot like a beginning four decades ago.

“I always feel fortunate I was able to start with the bank when it was small because it gave me a chance to work in all the different areas of the bank,” she added.

That broad institutional knowledge played a key part in making the merger a success. Jakel knew the concerns each department might have. She could recognize what changes would lead to the easiest transition.

“One of her assets is being a people person, so she could sit down and bring out the best in both groups,” AbbyBank President and CEO Pat McCrackin said. “It changed AbbyBank as much as it changed Fidelity in the organization.”