Published on November 6, 2019 by Anna Cushing 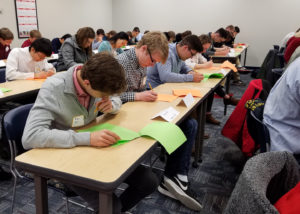 TS Bank President and CEO Josh Guttau first chewed on the idea of TSI in the depths of the Great Recession. “I personally believed [the crisis] was not caused by a housing crisis, nor economic crisis, nor financial crisis,” he said, “but a financial literacy crisis, in which many parties along the way played a role in the cause of this economic catastrophe.”

From that igniting belief, the institute took flight.

The TS Banking Group feels the weight of responsibility to arm customers with facts, Guttau said. “The more educated they become, the better decisions they can make about their financial futures — and the earlier they learn it, the better.”

“We not only need to teach, but to help form healthy financial habits,” said TS Institute director Kyle Osborne. “This is not just about giving folks a bunch of content and sending them off.”

When it comes to effective financial literacy, Osborne said, the two essential elements are educational and behavioral change. “That’s why we commit to classroom engagement, in-school banks, community classes and more.”

“It was exciting to be part of bringing an in-school bank to Treynor, but equally as exciting to have your own kids involved,” Larsen said. “One thing I noticed almost immediately was how they started viewing their own money and the decisions they were making when it came to spending,” Larsen said.

As his kids grew up, a couple now in college, Larsen said the habits they nurtured early on have yielded the fruit of good decisions. “I do not believe they would be where they are today without the benefit of this early financial literacy foundation,” Larsen said.

The Treynor-school partnership blossomed, reaching numerous schools within a two-hour radius of the town. As the bank expanded, so did the available partnerships between the Institute and local school districts in Tioga and Crosby, N.D. and Clinton, Ill., where TS Bank has sister charters.

TS Institute served 31 schools and 13,247 students just last year. There are in-school banks in six schools in southwest Iowa and one in North Dakota. Students saved approximately $1,250 each week, and a total of $41,250 for the year.

Jennifer Plummer, Council Bluffs Community School District fourth-grade strategist, has a son who was one of the first student bankers at his elementary school. “I know how much that had an impact on him,” she said. “I wanted other students to be able to benefit from learning about financial literacy,” Plummer said, so she approached TS about starting another student bank at Rue Elementary School, Council Bluffs, Iowa.

The CBCSD and the TS Institute then created the second K-12 student banking program in the United States.

“We went to schools and said, ‘Here’s what we’re doing — no catch.’” Osborne said.

Initially, the Institute only worked with schools that wanted to offer financial literacy coursework, but eventually all public middle and high schools in Iowa were required to do so in 2010. TS Institute worked directly with the department of education to establish these standards. “We were poised to help our state in instrumental ways,” Osborne said.

The young banker reminds her parents when it’s bank day on Fridays, “and will talk to us about the importance of saving money or what types of purchases she could choose to make with her funds,” Morehead said.

In the past few years, the institute has honed in on reaching community members and teachers. The organization plans to implement teacher training linked to graduate-level or teacher renewal licensure credits in November.

The $375 million bank understands that the lack of financial education can leave people living in poverty. “You have people being taken advantage of from a consumer standpoint,” Osborne said. “We have a group of people in our area who want to flourish, they genuinely want to flourish, but don’t have an avenue where they can be educated.”

TSI steps in the gap.

Osborne dreams to eventually have a former TSI student walk in his office with a small business and a desire to give back to her community.

The Institute’s mantra is to teach people to fish to feed for a lifetime. “Most people don’t get to a point of flourishing without some help,” Osborne said.