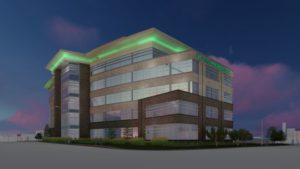 Construction of the five-story building began March 18, with an estimated completion date of November 2020. Once open, it will serve as a gateway to downtown Sioux Falls, said President Dave Rozenboom.

The bank is currently headquartered nearby at 601 S. Minnesota Ave; the site of the future First Premier headquarters rests in a prominent location targeted for future development.

“A lot has changed since First PREMIER Bank was created in 1986,” CEO Dana Dykhouse said. “ But the one thing that has remained constant is our commitment to building strong relationships one customer at a time and always doing what’s right for our customers.”

The new main office will include retail, business and private banking, home mortgage lending, and trust and investments along with other support functions.

FIRST Premier Bank been named one of the Best Banks to Work for by American Banker Magazine for the past four years in a row. First PREMIER is also the 10th largest ACH originating bank in the country and PREMIER Bankcard is the 13th largest issuer of Mastercard credit cards.