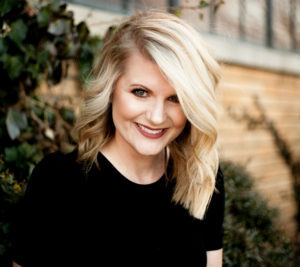 Natalie Bartholomew is not a golfer. She is a women’s advocate, a working mom, an influencer, a blogger, and first and foremost, a banker.

In fact, she’s The Girl Banker. Bartholomew started her blog, The Girl Banker, along with its Instagram, Facebook, Twitter and LinkedIn pages, to start a conversation among women in banking and women who might be part of banking’s future. The Girl Banker features a “Girl Banker of the Week,” which highlights significant women in the banking industry, their stories and their motivations.

The chief marketing officer and vice president of Grand Savings Bank, Rogers, Ark., began crafting her brand after attending a few industry meetings populated by men. “I call them OWDs, without any disrespect, but old white dudes,” Bartholomew said. “I just got so tired of seeing them day in and day out, and I wondered where all the women in leadership are, and why are they not here?”

As Bartholomew spoke to high school and college-aged girls, the question continued to taunt her when she realized how few of them were considering careers in finance. “There’s some kind of barrier that’s keeping women from considering banking as a career,” Bartholomew said, “and obviously someone needs to get out and advocate for it.”

The Arkansas banker said that sharing the stories of women bankers — young and old, novice or practiced — can shed light on the abundance of opportunities there are for women in the industry. “If no one’s out there telling anyone about [these stories,]” she asked, “how are we ever going to attract top talent for the industry going forward?”

The Girl Banker provides insight to what it’s like being a woman in banking through banker testimonies that span the states. She said the network of women and their stories have all but fallen in her lap. Not long after she launched the blog at the end of 2017, her inbox sang with words of encouragement, stories, inquiries for advice, and invitations to connect. “The most important thing to me at the end of the day is when I have someone share a story about how something I posted really resonated with them,” Bartholomew said.

And that’s the lifeblood of the blog. Bartholomew strives to be transparent and vulnerable in her posts in order to engage authentically with her audience in a conversation that she said needs to be pursued. In addition to highlighting female bankers’ successes, the Arkansas banker writes about everything from how to dress as a woman in a man’s world, the frustrations of the golf culture, the myth of work-life balance, and how to nail an interview.

Bartholomew never had anyone convince her that banking was her perfect career path, but always knew she wanted to be a banker and was captivated by the industry as she continued to pursue it.

Banking from an early age

Although Bartholomew played with her fair share of Barbies and Cabbage Patch dolls growing up, her favorite game to play was “banker,” with blank bank notes, envelopes and stationery from her grandfather’s bank, then named Farmers & Merchants Bank, which has since been acquired by Arvest Bank.

Bartholomew worked at Arvest for 12 years. She was trained in customer service on the teller line during her undergraduate years at the University of Arkansas, and worked in loan operations as she delved into agricultural economics during graduate school. She held fast to the path of her banking pursuit at the Graduate School of Banking in Boulder, Colo., which led her to become the vice president of marketing and lending at the First National Bank of NWA, Rogers, Ark., upon graduation. She joined Grand Savings in 2017.

Despite her passion for the cause, Bartholomew was initially hesitant about the blog for fear of stirring controversy and coming off as a self-promoter. The blog was launched at the cusp of the #MeToo movement, and Bartholomew said, “Knowing that criticism was right around the corner was something that I really had to prep myself for.” And although it did come, Bartholomew said it never came from women who work in banking.

“I just have to remember why I’m doing this,” Bartholomew said, “to be an advocate for the women in this industry, and to be a proponent for young women considering this industry as a career. As long as those two things are still in line and I’m doing what I can to give a positive voice to both of them, to me that’s a success.”

‘Blind Eye’ litigation and what it means for banks

Banking core startup seeks to be an alternative