Noah Wilcox has a healthy appetite for independent community banking. The fourth generation banker and former ICBA chair can easily dish on how well small institutions support Main Street economies. And when it’s time to deliver an impassioned diatribe against reg burden or unfair competition or government overreach, Wilcox will embrace the “bully pulpit” without hesitation: He’s practically been ordained to preach the gospel of independence.

Yet the Minnesota community banker’s soul is in occasional need of nourishment and rejuvenation. Wilcox feeds his soul in the same place he nourishes his family: In the kitchen of his Northwoods home. This month, Wilcox published a cookbook entitled, “It’s in the Giving,” where he shares recipes he’s long perfected while entertaining family and friends.

“I have been dreaming of writing this book for years,” Wilcox said. He held onto the idea as a possible retirement project, but then came March 2020 and a government-issued stay-at-home order. As everyone grappled with what life in a pandemic might taste like, and not fully understanding what the future held for his two banks — Grand Rapids State Bank and Minnesota Lakes Bank, Delano — Wilcox said: “I found myself sitting at home, wondering what the hell was going on. I’m a virtual [ICBA] chairman. I needed to do something different.”

With most of his recipes existing only in his head, Wilcox wrote and wrote: “About 80 percent of the book” poured out of him in one weekend. That was only the first course. Wilcox had to work out measurements, craft short narratives to accompany his selections, and document his cooking secrets. “I wanted the recipes to work for the readers exactly the way they work for me.”

Wolfgang Puck once likened cooking to painting. As an experimental home cook, Wilcox said he approaches the craft with the curiosity of an artist, never being afraid to try something new. Not enough has been made about Wilcox’s passion for art or cooking.

Because Wilcox has an art background, he had always conceived this project with artwork rather than photography. To beautify the cookbook, Wilcox turned to longtime friend and artist, Deb Page, who had owned a framing shop in Grand Rapids until retiring. “We used to talk about this project and she had always wanted to illustrate a cookbook,” he said.

“I cook a lot for family and friends and over time many requested recipes for certain dishes,” Wilcox explained. The more often people requested recipes, the more Wilcox became inspired to complete the cookbook. His focus on sharing his cooking passion with others also inspired the title.

“I have been so grateful to bring joy to so many through my cooking,” Wilcox said. “I believe that real joy comes from giving. So, ‘It’s in the Giving.’” 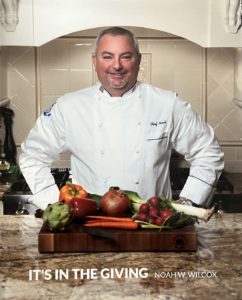 The 85-page book is organized like a good meal: Starters, Mains, Sauces, Soups and Stews, Sides and Sweets. The recipes are a collection of his favorites, including King Carbonara, Heritage Pie (a nod to his Welsh ancestry), Noah’s Pasta, San Marzano Sauce, Barbeque Chicken, and a meatball recipe that he’s been on a quest to perfect for years, something “crispy on the outside and soft on the inside.”

Wilcox said he’s still figuring out how to manage the demand for his cookbook. He’s given away about 275 of the 500 books he had printed using a Phoenix-based, family-owned book publisher. (Kristi Poling, marketing and creative services manager at Grand Rapids State Bank, handled the book’s graphic design.) He’s gotten the book, which retails at $25, into a few specialty retailers in Minnesota, including Five Swans in Wayzata, Ampersand in Edina’s Galleria, and Frame Up and Red Willow, both in Grand Rapids.

The 85-page book, which includes 49 recipes, has a website. Wilcox said he hopes to soon offer online cookbook sales. In the meantime, he’s happy to help facilitate an order personally.

Wilcox said his intention is to direct the net proceeds from the sale of cookbooks to charity, a process he’s working through currently.