In its July 16 weekly report, the SBA reported that fiscal-year-to-date 7(a) volume topped $20.95 billion, 34 percent higher than the same period in fiscal 2020. This year’s performance is also ahead of the pace for fiscal  2017, when the administration guaranteed a record $25.4 billion in loans. The fiscal year is slated to end Sept. 30. The increase came as Congress approved funding for a third round of PPP lending in late December as part of the $900 billion Covid-19 relief bill. Congress has waived user and borrower fees and provided funding to cover several months of payments for new borrowers, part of the government’s pandemic-related stimulus effort.

Jim Amundson, president/CEO of Independent Community Bankers of Minnesota, said community banks led the way in PPP loans, an assertion echoed by the Conference of State Bank Supervisors. As of last December, the PPP allocated nearly 4.9 million forgivable loans worth more than $521 billion. Of those, community banks made 28 percent of the loans — $148 billion, outpacing their market share. At the time, community banks had a 12 percent share of total industry assets and 15 percent share of total industry loans.

Amundson said the work of community banks was especially noteworthy because of initial PPP glitches. Those problems, including system misfires and uncertainty surrounding program requirements left bankers sometimes working all night. Many borrowers unsuccessfully tried to reach out to large financial institutions.

Now, Amundson said there is not as much of a need for PPP funding, roughly 1 1/2 months following the program’s ending. However, existing borrowers can still be eligible for PPP loan forgiveness. Banks continue lending to small businesses and providing previously available resources. 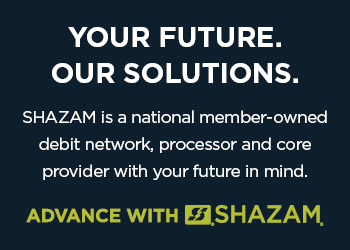