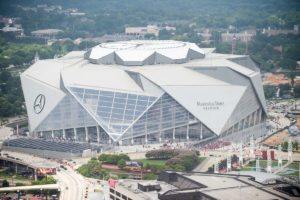 Go to watch the NFL’s Atlanta Falcons or MLS’s Atlanta United FC play a game at Mercedes-Benz Stadium and be prepared to use a credit or debit card or your phone to pay for everything. Whether you want a burger or a jersey — or even a brewski from one of the vendors lugging cans of the cold stuff through the stands — your cash is useless.

Only have cash with you? Go pump it into one of the stadium’s five kiosks to obtain a pre-paid, no-fee debit card to make your purchases.

This shift away from cash is part of an effort to speed up lines for fans and help the stadium operations run more efficiently, the facility’s operators say. Others are following suit.

Venues and stores going cashless might have seemed unimaginable only a few years ago, but they’re slowly becoming more prevalent. Merchants are making the move in the name of efficiency, especially as consumers increasingly shun the old greenback and reach for plastic. Or their phones.

Lately, innovative electronic payment platforms and apps are cutting into cash-or-credit territory. Besides being able to use their phones to make purchases, apps let consumers directly deposit money into friends’ banking accounts via email or text.

It’s easy to see why some say cash is bound to go the way of checks in the not-far-off future.

Others say that the financial industry must overcome significant hurdles before our economy can go completely cashless. A quiet backlash to the shift to go cashless has Philadelphia and other municipalities enacting laws that require stores to accept cash as a way to protect the unbanked and those without access to credit.

It’s a complicated time, and banks and merchants are faced with risk and reward as they try to accommodate consumers who wrestle with the cash dilemma themselves.

“I’m not here to tell you that cash is going to die, but sooner or later it becomes so expensive, like checks, that it’s hard to service,” said Chris Nichols, chief strategy officer for Winter Haven, Fla.-based CenterState Bank.

Consumers used cash in 26 percent of transactions in 2018, that’s down four percentage points from the prior year and part of a downward trend, according to Federal Reserve data that reaches back to at least 2015.

Nichols said banks and merchants are likely to more seriously weigh going cashless when cash transactions fall to 15 percent, as the costs to handle and process it could outweigh the benefits. He puts the timeline for that at roughly 20 years.

“Going to an ATM or going into your bank branch and getting different denominations and carrying a wad of cash around on a daily basis or dealing with coin is highly inefficient, not just for the transactions but also for the data,” Nichols said. “If I’m a consumer and I’m really concerned about my budgeting, I want to capture all those transactions. And it’s easier to do it on my phone and figure out where I spend my money and get alerts.”

Going cashless certainly has its advantages. With credit and debit cards, you have a record of your transactions all in one place, and maybe earn reward points in the process. And now with apps and digital wallets, you can do that as well as send money to anyone with a bank account, sometimes within minutes. When it comes to splitting the check at the end of a night out, instead of hoping you have the right amount of cash on hand, you can send your dining partner the exact total via your phone.

Right now, Zelle, Venmo, Apple Pay, Samsung Pay and Android Pay are among those at the forefront of the electronic payment space. Some charge a small fee if you want to expedite a payment, and the time varies from minutes to days for transactions to be processed.

For cashless merchants, they also have that day’s business in one place when they do their books. For some, it’s about efficiency. Casual restaurants in cities were among the first to decline cash, often for simplicity and to cut down on the time it takes to handle currency and make change.

“If you’re the average merchant, you’re still going to take cash,” CenterState’s Nichols added. “And if your merchant takes cash, then your bank is going to have to take cash.”

CenterState’s research shows that handling cash can take up to 20 percent of a small business’ resources as they deal with counterfeiting, counting cash, maintaining cash, leakage and moving cash around. CenterState is seeing the migration away from cash among its business customers with slight declines in the frequency of cash drops as well as in volume, Nichols said.

As for claims that it’s easier for business owners to do their books at the end of the day when everything is electronic, Craig Shearman, vice president for government affairs public relations at the National Retail Federation, doesn’t buy it.

Shearman added that despite the waning use of cash, reports of it becoming obsolete are overblown.

“If all your customers are going to come to the door with a roll of cash in their hand, most retailers are very glad to take cash,” Shearman said. “If the day comes when everybody is carrying plastic or has a chip in their phone or it can be done with fingerprints or facial recognition, retailers will adapt to what their customers prefer.”

As apps slowly dig into plastic’s long-held territory, the interchange fees that come with each swipe of a card are a focus for banks.

Apps that let consumers load up a balance and make purchases with their phones have impacted debit card fees, which average about 23 cents per swipe, according to the Fed. When customers transfer a sizable chunk of cash to a digital wallet, such as for their Starbucks app, rather than whip out their debit card each time they buy their latte, banks feel it.

“That cuts into the noninterest income that’s just so important to a bank and how we operate,” said Ben Udell, senior vice president at Monona Bank in Monona, Wis.

Credit card interchange rates can amount to 2 percent or more. Merchants pay these fees and pass them to the consumer. According to the Nilson Report, merchants paid $64 billion in credit and debit card fees from Visa and Mastercard in 2018, up 12 percent from 2017.

One of the biggest hurdles preventing the widespread adoption of cashless apps is the lack of a neutral third party that can handle the transactions in real time.

That is about to change.

The Clearing House, which is owned by several of the world’s largest banks, is rolling out its RTP network to all institutions in 2020. The promise: Transactions processed in real time.

But bankers and the National Retail Federation’s Shearman are closely watching the development of the Fed’s solution FedNow: A real-time clearing and settlement rail, which isn’t expected to roll out until 2023.

“We think it’s very important that systems like this be set up by a neutral third party rather than by the credit card industry or the banks,” Shearman said.

By clearing payments in real time, you take away counterparty credit risk in banking or whether your transactions are going to be honored, Nichols said. “With [real-time processing], we just eliminated that major friction point of not knowing if that person is going to pay their credit card or honor that credit card or honor their check.”

Consumers who are unbanked or underbanked make the case to keep cash around, and offer both a challenge and an opportunity for banks.

Free checking accounts are one solution, but if customers use a free account primarily to roll money into a Venmo account or digital wallet, “then where are we actually making money on this relationship to remain profitable?” Udell wondered.

To protect the most vulnerable, several cities have enacted or are considering laws requiring that all or most businesses accept cash, including Philadelphia, San Francisco, New York City, and Washington, D.C. Some states are also looking at the issue. The argument against cashless stores is that they discriminate against low-income residents who don’t have a bank account or a credit card.

“The purpose of this [ordinance)] is to ensure that all city residents — including those who lack access to other forms of payment — are able to participate in the city’s economic life by paying cash for goods and many services,” San Francisco’s legislation states.

Cash is holding the line in certain cases. Fed data shows consumers still love to use hard currency for purchases of less than $10. Udell said it’s still easier to plunk down a $5 bill for a coffee or beer than swipe a card, although even vendors at his local farmers market take plastic. Still, he wouldn’t bet on cash disappearing.

“There’s still enough instances and enough people who use it that it’s never going to go away,” Udell said.

Nichols, who travels often, said tipping bellhops and doormen is one of the last places he uses cash.

“If I could hit a QR code and just pay someone with Venmo, I would,” he said.

For now, the market remains cluttered with startups, fintechs, established digital players and banks all vying for a platform to make cash irrelevant.

Udell said that’s what makes it an exciting time to be a banker.

“It’s just a different world that’s constantly evolving, which is awesome and great,” he said, “but if you wait forever because you want to see how it plays out, then you’re going to miss a lot of opportunities along the way.”