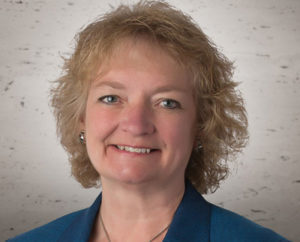 The number of FDIC-insured institutions in the United States was 5,670 as of March 31, 2018, down from 8,534 on Dec. 31, 2007. Over the past five years, 1,292 institutions have been absorbed by mergers, while the number of failed banks has declined significantly. The trend will continue through 2018 and 2019 based on multiple factors.

When reviewing data on pricing, it is important to recognize that the price paid in most private company cash deals in this part of the country cannot be disclosed under the terms of the definitive agreement and is additionally granted confidential treatment by the regulators. Further, pricing for cash deals and smaller transactions may differ (up and down) from these public stock deals. Other factors affect price such as tax treatment and pre-closing dividends. Therefore, while publicly available data is very useful in terms of pricing trends, it should not be viewed as complete data.

Several factors are contributing to sales activity. First, there are no failed banks to buy at low prices from the FDIC, and it is difficult to charter a new bank, causing greater demand for healthy banks.

Second, technology and compliance costs continue to grow, creating pressure to increase size to spread costs over a larger base.  According to a recent survey of 314 institutions conducted by Gartner, technology spending claims roughly 8 to 10 percent of revenue and expenses for small and midsize community banks.

Third, the bank deposit market is increasingly competitive, and banks are pursuing a number of tactics to gain deposits, including buying another bank.

Fourth, banks are pursuing acquisitions to diversify their balance sheets.

Finally, succession planning continues to be a significant challenge for the industry and is also  contributing to consolidation. 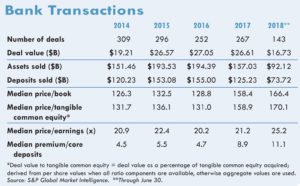 In the Midwest, many sellers continue to use an auction process, which can take many forms. Sometimes only a handful of potential acquirers are contacted; at other times, 50 or more potential buyers might be contacted. Increasingly, however, deals are negotiated between two parties.

Both sellers and buyers are developing strategic lists of potential markets/counterparties and then approaching the counterparty about a potential acquisition.  The courtship can take a long time. I am aware of numerous deals where the initial contact might have occurred four or five years before closing.

Obtaining regulatory approval is generally becoming easier and quicker given the health of the industry, changes in leadership at the banking agencies, and deregulation.

The Economic Growth, Regulatory Relief and Consumer Protection Act (S. 2155) signed into law in May eliminated or eased several regulatory burdens on large community banks and regional and superregional banks. Significantly, it increased the asset threshold for systemically important financial institutions (which have been subject to stricter oversight, including the Federal Reserve Board’s enhanced prudential standards) to $100 billion from $50 billion immediately, and to $250 billion from $100 billion within 18 months.  This reduces the number of banks subject to enhanced Fed supervision under Dodd-Frank rules to 22 from 38. Elimination of this arbitrary asset threshold should arguably fuel consolidation.

Banks falling below the $50 billion threshold have carefully managed to stay below the threshold to avoid subjecting themselves to heightened regulatory scrutiny and the increased costs of annual CCAR stress tests, liquidity rules, living wills, and restrictions on shareholder payouts.

According to a white paper released by FJ Capital Management, only two banks, CIT Group and New York Community Bancorp, have gone above $50 billion in assets since passage of Dodd-Frank in 2010. Raising the SIFI threshold should result in additional acquirers.

Additionally, S. 2155 raises eligibility for banks’ use of the Federal Reserve’s Small Bank Holding Company Policy Statement to $3 billion in assets from $1 billion.  This could additionally spur more M&A activity within this group. As noted above, 88 percent of the targets and 50 percent of the buyers since 2010 were institutions with less than $1 billion in assets.

This space has been active. Raising the threshold to $3 billion from $1 billion allows more community banks to use higher levels of debt.As evidenced by Washington Federal’s announcement that it will be on the sidelines given its recent BSA Consent Order, BSA continues to be a significant impediment to application approvals.

In certain parts of the country, protests based on CRA, fair lending, and other compliance matters have slowed approvals. According to the Federal Reserve’s most recent “Semiannual Report on Banking Applications Activity,” applications receiving adverse public comments in 2017 had an average processing time of 142 days, whereas the processing time for proposals not receiving comments was 57 days. These numbers do not tell the whole story.

Protests can result in the Federal Reserve requesting that applications be withdrawn and later resubmitted. In addition, as the number of institutions declines, we are seeing an increase in competitive issues in certain markets as fewer institutions hold greater market share, particularly in smaller metropolitan markets and rural areas.

For acquisition applications submitted by nonbanks and investor groups, regulators essentially view them in a fashion similar to de novos: regulators focus on business plans, management plans and capital plans.

In summary, the regulatory approval applications process needs to be approached with careful analysis and attention based on each deal’s unique set of factors.

Karen Grandstrand is a nationally recognized M&A and financial services regulatory attorney and a financial industry advisor. She is a shareholder in the Minneapolis law firm of Fredrikson & Byron, P.A and chair of the firm’s Bank and Finance Group. Prior to joining Fredrikson, she had a 14-year career with the Federal Reserve Bank of Minneapolis where she was the senior vice president of the Banking Supervision and Risk Management Departments. She received Amazing Outside Director recognition earlier this year from this publication and Best Lawyers’ “Lawyer of the Year” in Minneapolis Financial Services Regulation Law, 2019. Contact her at [email protected] or 612-492-7153.

Editor’s Note: This article originally appeared in the September 2018 issue.