Council Bluffs, Iowa-based TS Bank recently partnered with The 712 Initiative and Habitat for Humanity of Council Bluffs to launch a neighborhood program, AMP. 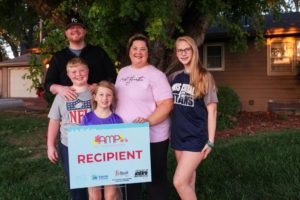 “The generosity of this anonymous donor and the love for Council Bluffs is simply incredible,” said Sheryl Garst, CEO of The 712 Initiative. “The households nominated by their neighbors are hardworking individuals and families that simply did not have the disposable income for these types of projects.”

As of Nov. 24, nearly $130,000 had been expensed for the first set of 17 selected projects. Eight projects are expected to be finished by next month with the remainder starting in the spring. All funding is expected to be used by the end of next year to help 31 homeowners. The AMP program is expected to assist the Habitat for Humanity of Council Bluffs home repair programming offerings and future down payment assistance work.

According to a recent housing study from the Sherwood Foundation, 40 percent of households do not have $400 to cover an emergency.

“Add in the damage from the fall storms we all experienced, and the porch deck, fencing, or exterior paint job can fall quickly down on the priority list and can feel overwhelming,” Garst added.

​​Innovation must be built on foundation of trust

Can bank ATMs be adapted to offer Bitcoin?