Banks pull in $57.4 billion in the third quarter

Published on November 26, 2019 by Mara Gawarecki 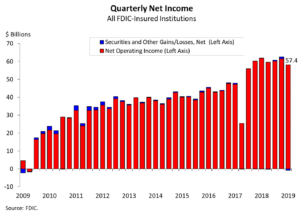 The 5,256 commercial banks and savings institutions insured by the FDIC made $57.4 billion in aggregate net income in third quarter 2019, down $4.5 billion or 7.3 percent from a year ago.

That drop was caused by higher noninterest expense and loan-loss provisions and realized securities losses, the FDIC said.

Overall, national average ROA declined from 1.41 percent in third quarter 2018 to 1.25 percent, and average NIM declined by 10 basis points from a year ago to 3.35 percent.

On the positive side, total loan and lease balances increased by $99.5 billion (1 percent) from the previous quarter, with growth driven by consumer loans, which includes credit cards (up 1.8 percent to $31.3 billion) and residential mortgage loans (up 1 percent to $22 billion).

“The FDIC’s report shows that our nation’s banks remain key drivers of the U.S. economy with nearly $100 billion in new loans generated in the third quarter,” said James Chessen, chief economist for the American Bankers Association.

Growth in consumer and real estate lending offset slowing business loan demand, although the latter remained strong at over 6 percent, he said. Asset quality and deposit growth also continued to grow, and “nearly all banks – 99.7 percent – are well capitalized, with the industry adding $104 billion to its $2.1 trillion capital base over the year,” Chessen said.

During the third quarter, four new banks opened, 46 institutions were absorbed by mergers and no banks failed. The number of problem banks decreased by one, to 55.

Using digital tools to connect with customers during COVID-19