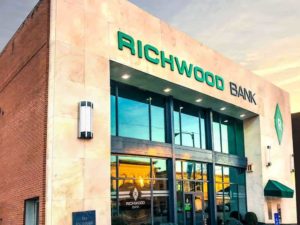 Call it miscommunication, serendipity or divine intervention, but the first meeting between marketer Heather Wirtz and banker Chad Hoffman has resulted in a groundbreaking way for Richwood Bank in Richwood, Ohio, to earn money.

Wirtz had moved to Ohio in 2013 to be closer to family, and while building her professional contact list, a man from her church arranged for her to meet with Hoffman. Wirtz thought the meeting was about consulting work. Meanwhile Hoffman, who’d agreed to the meeting as a favor to his friend, thought Wirtz was seeking a job opening that didn’t really exist.

After the two met, Hoffman offered Wirtz — who has a background in digital communication, media buying, ad design and branding — a full-time position as chief development officer. He “basically gave me the keys to the kingdom,” she said. It was “a marketer’s dream.”

Richwood is a town of 2,200 people located about 50 miles north of Columbus, the latter home to companies like Nationwide Insurance, Victoria’s Secret and Abercrombie & Fitch. There are plenty of advertising and marketing firms in Columbus, but access to their services can be out of reach for small businesses. Wirtz’s thought was to help the bank’s commercial customers “thrive and grow” through marketing services.

It was something that hadn’t been tried before, so the bank sought guidance from the Federal Reserve. An in-depth, on-site interview with Fed auditors ensued, where bankers and regulators hammered out which services could be provided, what the business goals were, and how to ensure data and general bank security.

More questions were compiled and another round of interviews followed. After Wirtz demonstrated the impact of services and how they could improve the bank’s business accounts, the Fed greenlighted the plan for the bank to offer marketing as a fee-based service, and Richwood Marketing was born.

One stipulation the bank set for utilizing Richwood Marketing was the service would be available only to bank customers. “We have to tie it to an account,” Wirtz explained. However, “that’s helped us grow our model. We’re getting businesses choosing us as their bank because of the marketing services.”

Wagler Badenhop is one of Richwood’s success stories. The accounting firm was relatively new and looking for “a group of energetic talent to assist us with growing our accounting brand,” said Jacob Badenhop, co-owner. The marketing team helped WB with the whole caboodle: branding, brand development, website, and even space development — the marketing group helped decorate WB’s offices to match its brand. Its approach is non-status quo: “We are currently advertising our accounting to farmers on the back of a grain semi-trailer,” Badenhop explained.

The results from the company’s social media efforts have been significant. The company adds three to five new clients each month and its brand is known outside its 90-mile radius. “Our overall brand is recognized and stands out in the communities,” Badenhop said.  “The team at Richwood Marketing has been very helpful, responsive, and innovative to work with. Oftentimes, they come to us with new ideas before we come to them. For a new business, this is a huge benefit.”

The bank has also derived benefits from its marketing relationship. Only one of WB’s partners had been banking at Richwood Bank when the relationship began. Within six months, the accounting firm moved all of its accounts to the bank.

Part of the attractiveness for WB was that Richwood met standards and was budget friendly, Wirtz explained. “I price myself under market,” Wirtz said. Depending on the service, Richwood Marketing’s price tag is 30 to 50 percent lower than a traditional agency would charge; however, “if I were to compete with them on quality and design, I would go toe-to-toe with them.”

Marketing clients run the gamut on size and budget, Wirtz said. “We offer anyone who banks with us a free consultation,” she said. Richwood Marketing has also expanded its services to other community banks, two of which are already clients for whom Richwood has designed websites, logos and brochures. Richwood Marketing taps into the expertise of its compliance officers to review materials to ensure they meet banking regulations.

Richwood Marketing launched inside the $704 million bank nearly four years ago and now employs 15 people in a full-service agency that serves 132 clients.

Richwood Marketing benchmarks each account quarterly to see how it contributes to overall growth. Since its launch, $9 million in assets are attributed to the venture. Additionally, roughly 10 to 15 percent of the bank’s non-interest income comes from the marketing group.

In 2018, setting aside a December acquisition of Home City Federal Savings Bank in Springfield, Ohio, Richwood saw 17 percent growth in revenues, Wirtz said. “I can say we’ve grown significantly over the last three years. We do not advertise because we are busy handling the companies that want to join. So it’s definitely been well received.”