Sunrise takes purposeful approach to positioning for the future 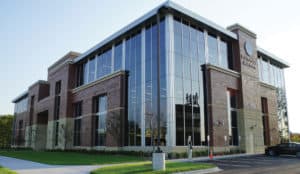 You can see Sunrise Banks’ newly-opened headquarters above the trees as you approach the I-94/MN 280 interchange near where Minneapolis and St. Paul rub shoulders. Unlike a couple of its offices, the nearly 60,000-square-foot building isn’t on University Avenue but situated a few blocks south — a five minute walk to the door if you ride the Light Rail Transit Green Line to the Westgate Station.

The Green Line, which was completed in 2014, has brought a flurry of redevelopment along the central corridor and Sunrise Banks, as a CDFI, has been awarded New Market Tax Credits to help fund a number of them. The bank received its first allocation of NMTCs, $25 million, in 2010; it received another $38 million in 2013. It used NMTC loans in the amount of $9.1 million to purchase and develop its new headquarters. Sunrise was recently awarded another $70 million to deploy; some of those funds are already earmarked for the central corridor, said Sunrise CEO David Reiling.

When deciding where to build its headquarters, Sunrise President Nichol Beckstrand said they had initially thought they should find a building to rehab rather than go for new construction. Leadership wanted a location as convenient for the bank’s East St. Paul employees as for the people working in Minneapolis’s North Loop. “We polled our employees to find out where they all lived, and this location was almost exactly in the center of everyone,” Beckstrand said. The bank has 220 full- and part-time employees, with 115 of them working in its headquarters.

The building’s three-story exterior is more glass than brick, pulling natural light into the audit, credit and IT departments, along with the holding company offices, all located on the two secure upper floors. There are conversation nooks inside each department as well as between them, positioned intentionally to encourage employees to collaborate, perhaps innovate.

The first floor was designed to embrace community. Roughly half of the ground floor, some 7,600 square feet, has been leased to the Twin Cities YMCA for use as its employee training facility. Nearly equal in size is the bank’s community room, dubbed The Bridge, a nod both to the physical proximity of the building and the bank’s role within the community. The Bridge offers the latest in multimedia technology and is available without charge to bank customers and community groups. Also located on the main floor is a dedicated employee fitness center with shower facilities and a yoga room. The company dining space is called The Garage — a misnomer for the airy, colorful and clean dining amenities.

Along the corridor that leads to The Bridge and The Garage, a collage of photos, news clippings and artifacts tell the story of the bank’s past. The unfolding story of today’s Sunrise Banks is also on display throughout the building, albeit more subtly, from the Do Good stickers inside the elevators where employees swipe their access cards, or the myriad variations on Do Good messaging in conversation nooks, on the walls of shared spaces, embedded into the floor. The bank’s brand is even reinforced inside the stairwells, where employees are encouraged to take chalk to stair risers to write their own interpretation of mission and values.

Outside the building, an American flag flutters. Because environmental impact is a B Corp metric and an institutional value, there are designated parking spots for car sharers and carpoolers and those cars that might need an electric charge during the day. Mica in the sidewalk catches the morning light. The asphalt is neatly striped and unsullied. The sod is lush. It’s all in hopeful contrast to the pale warehouse situated next door, fenced and overrun with weeds — a shuttered Weyerhaeuser distribution center of use to no one but graffiti artists. But the 12-acre site that is Sunrise Bank’s most prominent neighbor won’t be a blight for long. Moderate income and senior apartments, retail, and a city park are in the planning stages. It’s another urban revitalization project for Sunrise bankers to keep an eye on from their new offices. “We can’t wait to see how the neighborhood transforms,” Reiling said.