Coin banks precede commercial banks by several hundred years. The earliest coin banks located in homes were simple jars or clay pots. Mechanical banks were introduced in the 19th century as a way to add fun into the saving process.

The first known mechanical bank — as opposed to the stationary still banks — was a cast-iron item from 1869: A model of a bank, it featured a monkey cashier who deposited the coins it was given.

Cast iron models were most popular in America in the last quarter of the 19th century, although they lingered on until the demands of World War II made the shift to less expensive material unavoidable.

Katherine Kierland Herberger began to collect coin banks after buying one as a gift for her son’s birthday. Over the course of the next half century, she assembled a vast collection of both mechanical and still coin banks spanning more than two centuries; in all she had 277 mechanical banks and 812 still banks.

The banks in the collection, which was gifted to the Minneapolis Institute of Art shortly after Kierland Herberger’s death in 2003, span a wide range of themes and styles. Some are intricate works of art, while others celebrate moments in pop culture history ranging from the space race craze of the 1950s to Batman and JFK.

Presented here is a mere glimpse into the collection. Some of the banks are on public display at the Institute; photos of the entire collection can be seen in the book, “Money in the Bank: The Katherine Kierland Herberger Collection.” 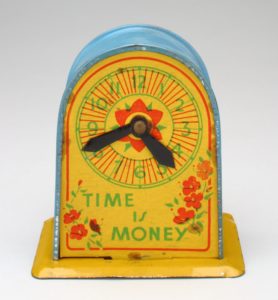 This coin bank, made in England at some point in the 20th century, offers a simple yet irrefutable message to its user. Like many items from the collection, its purpose was education wrapped in a cheerful color palette. We don’t know, however, whether that strategy made its slogan more likely to stick when the temptations of immediate gratification arose. 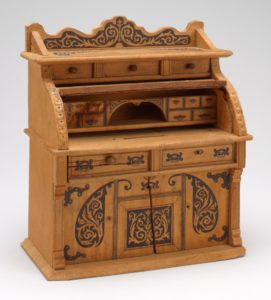 While some coin banks in the museum’s collection are the simplest of ceramic sculptures, others feature a wealth of detail. This German still bank model of a rolltop desk was carved and assembled at some point in the late 1800s or early 1900s. 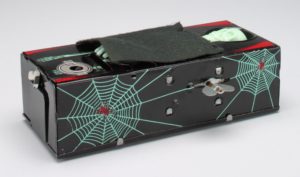 Not all coin banks attempted to teach a moral lesson. A Japanese bank from the 1900s features a lurid color scheme and a skeleton poised to lurch toward its user. Sometimes the coin banks are more toy than teacher. 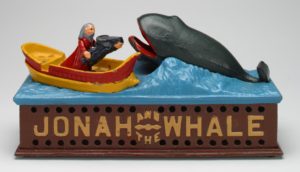 Mechanical banks, which feature moving parts, offer entertainment as well as a place to keep your pocket change. Amid the stormy seas, a fisherman prepares to heave Jonah — as well as the coin he carries — into the waiting maw of a mighty cetacean in this American bank from the 1950s or 1960s. 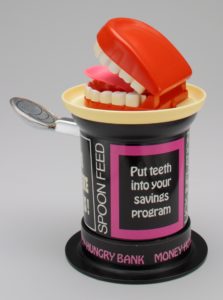 Some coin banks are made out of metal or glass, designed to last a long time while contributing something of beauty to the home of its owner. Others, like this 1975 American model, fall firmly into the camp of gimmicks. A set of pearly white plastic chompers — now somewhat faded with age — stands ready to devour the minted offerings placed before it. 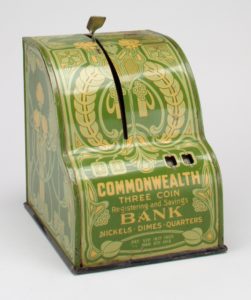 Beside early efforts at instilling financial literacy, some coin banks took inspiration from their full-size counterparts. Miniature safes and bank models proliferate, and here we see a cash register decked out in a thematically appropriate green color scheme. Rather than paper currency, however, this c. 1915 Illinois “Registering and Saving Bank” version accepts quarters, dimes and nickels.
Coin-bank collector supported the arts
Born in Mahnomen, Minn., in 1912, Katherine Kierland Herberger studied studio art at the University of Minnesota before marrying the man behind an Upper Midwest department store chain: G. Robert (Bob) Herberger. The couple wed in 1934, seven years after Bob started what would eventually be incorporated as Herberger’s in 1943. That single location in St. Cloud, Minn., eventually became a 40-location retail company stretching from Wisconsin to Montana.

The couple moved to Illinois shortly after World War II to pursue a business opportunity before eventually resettling in Arizona. They had frequently vacationed in the state, but made the move permanent in 1949 in the then-unincorporated Scottsdale. They became pillars of the local community, throwing their support behind such organizations as the Phoenix Symphony, the Phoenix Art Museum and the Scottsdale Artists School.

Kierland Herberger’s support for the local arts education scene eventually led to her name being placed on the college of fine arts at Arizona State University in Tempe (now the Herberger Institute for Design and the Arts). Kierland Herberger assembled the bulk of her collection of still and mechanical coin banks beginning in the 1960s. She became a notable figure in the world of coin bank collection (or argyrothecology) and was featured in the publications of several collectors’ groups. After her death in 2003, the more than 1,000 pieces were donated to the Minneapolis Institute of Art.

Taking nothing for granted: Advice for generation next